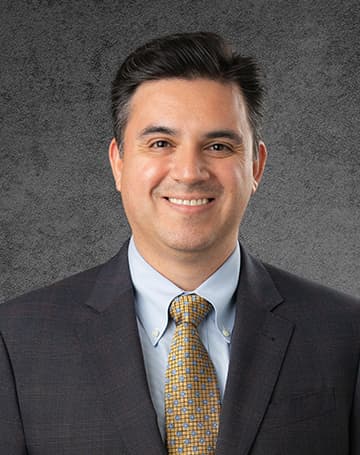 Rudy Pacheco is a trial attorney devoted to representing people who would not otherwise be able to have their day in court. Since the inception of his legal career, he has represented people victimized by big insurance companies and corporations in personal injury matters, including victims of reckless drivers, defective-dangerous products, vicious animals, and medical malpractice.

Rudy takes great personal pride in giving voice to those who cannot defend themselves. In one recent case, Rudy secured a high-value settlement on behalf a 2-year-old who was injured by a defective product and lost part of her left index finger. In another case, a toddler was severely burnt by a defective furnace. Rudy was able to help his young client by uncovering the fact that the defendant destroyed evidence in an attempt to avoid liability.

Children are not alone in needing compassionate legal assistance, and adults who have suffered the loss of their faculties are often some of the most vulnerable in our society. One such case involved a retired nurse who was recovering from back surgery at a rehabilitation center. She walked in using a cane and was her usual lucid and talkative self. Four days later, she was paralyzed from the neck down, had several fractured ribs and vertebrae, and suffered from symptoms of advanced dementia. She did not even remember her own name. Rudy gave her a voice and helped her hold the culprits accountable.

A native Spanish speaker (but also conversant in French and Italian), Rudy is able to connect with people who speak little or no English and need an attorney with whom they can communicate comfortably. For example, he has held insurance companies accountable when they take advantage of people – especially non-English speakers who are sometimes mislead by insurance companies into believing they do not have a claim.

Rudy has trial experience in the Counties of Orange, San Diego, and San Francisco. He is one of the few attorneys who tried a civil case during the COVID-19 shutdown. In a trial conducted via Zoom, Rudy helped the family of a 28-year-old man who donated one of his kidneys to his sister but went into a coma shortly after the surgery and eventually died. Absurdly, the hospital claimed that his death was due to some mysterious genetic defect. Rudy helped this family prove that the hospital staff negligently administered an opioid overdose and caused his death.

Rudy is married with one child and resides in Orange County. He is an avid cook and grill aficionado who loves to spend time with his family and friends.